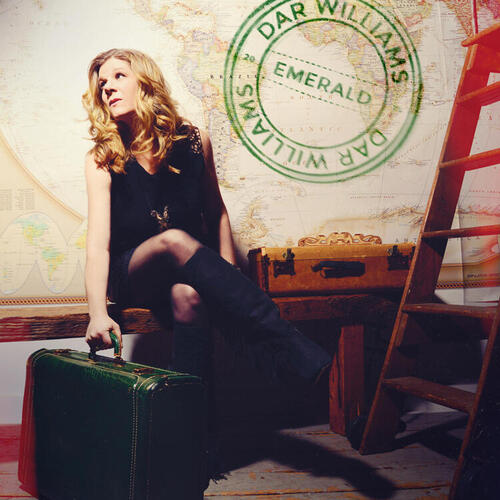 Every new album from Dar Williams represents her thoughts and feelings about both her own life and larger forces in the world. But her ninth studio record, Emerald, marks a particularly dramatic confluence between her experiences and broader contemporary culture—and what it means to be a songwriter at this moment in history.

In the past few years, Williams has been involved in a wide range of different efforts and projects: teaching a course titled “Music Movements in a Capitalist Democracy” at her alma mater, Wesleyan University; working with children at several summer camps; leading songwriting workshops; getting involved with the workings of her village; and writing a book about the ways she’s seen towns becoming more independent and prosperous over her twenty years of touring. In addition, in the face of dramatic transformations in the music industry, she is releasing Emerald on her own after choosing to part ways with Razor & Tie, her label for almost twenty years.

A scan of Emerald’s credits reveals the strength of her bonds in the music community. Recorded in Nashville; Los Angeles; Philadelphia; Beacon, New York; and Weehawken, New Jersey, the album features a remarkable list of guest musicians and co-writers, including guitar virtuoso Richard Thompson, Jim Lauderdale, Eric Bazilian and Rob Hyman of the Hooters, and Suzzy and Lucy Wainwright Roche.

End of the Summer